Travel tales from the North Kimberley

Travel with us along the North Kimberley coast as the crew share some stories and amazing images of their recent voyage. 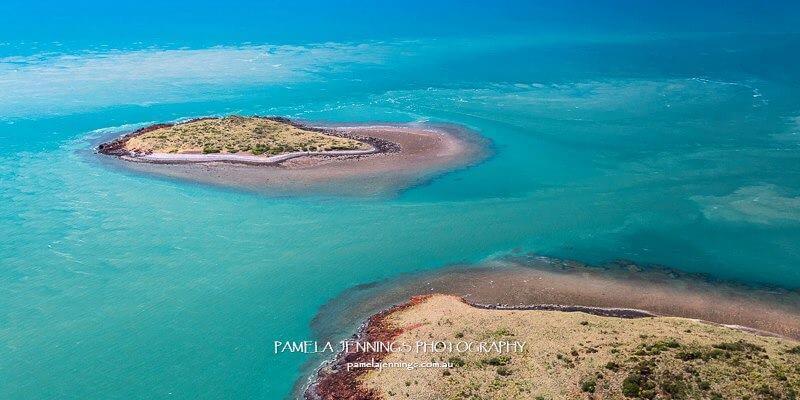 On Day 1 of the trip, we flew from Kununurra over the Cambridge Gulf, enjoying amazing views of the Drysdale River and Joseph Bonaparte Gulf (above) on the way. We arrived in Kalumburu and the local indigenous rangers took us out to meet the boat, a sailing catamaran, in Honeymoon Bay. 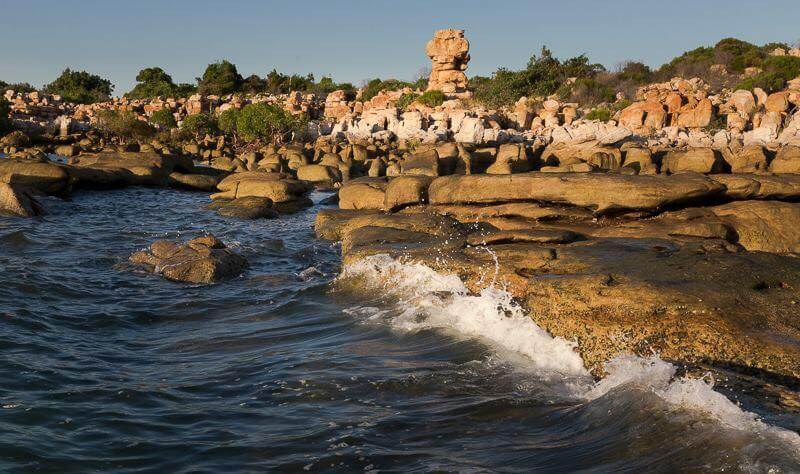 Day 2 saw us coasting around the Anjo Peninsula (above). We arrived in Freshwater Cove and trekked inland to the waterfall to replenish water stocks for the boat, but due to a serious lack of rain through the wet season – there was no water flowing there! After a very warm trek back to the beach we took a dip and were refreshed by a feed of fresh rock oysters. 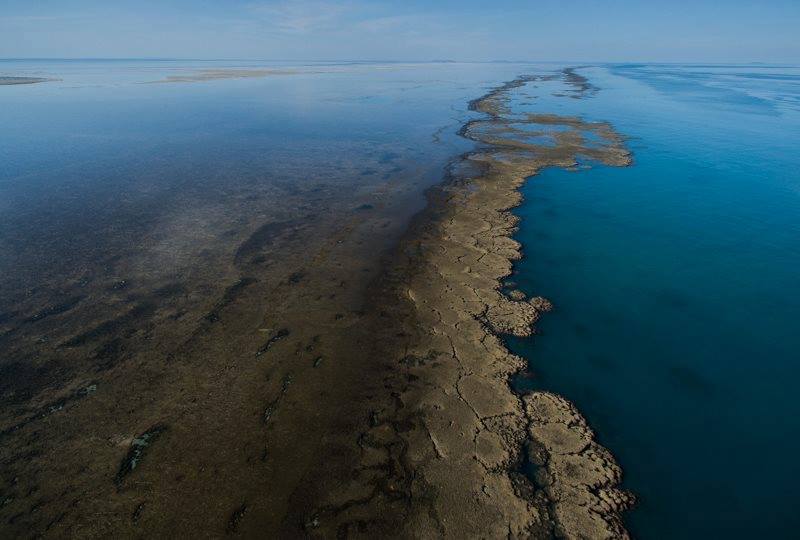 By Day 3 we were rounding the Bougainville Peninsula, with short stops at Dingo Island and Rad island before travelling on to reach the eastern side of Long Reef by evening. We were too exposed to the weather in this position, so took the decision to sail around the reef through the night. Thanks to our GPS and the great work of the crew, we woke up safely moored 50 metres from the western side of the reef, ready to snorkel and take pictures.

Day 4 was spent exploring the hollows and caves under this amazing platform reef. The reef itself is in very good condition, with very little evidence of bleaching. We were surrounded by smaller sharks, including black tip reef sharks, bronze whalers and even one or two baby tiger sharks. 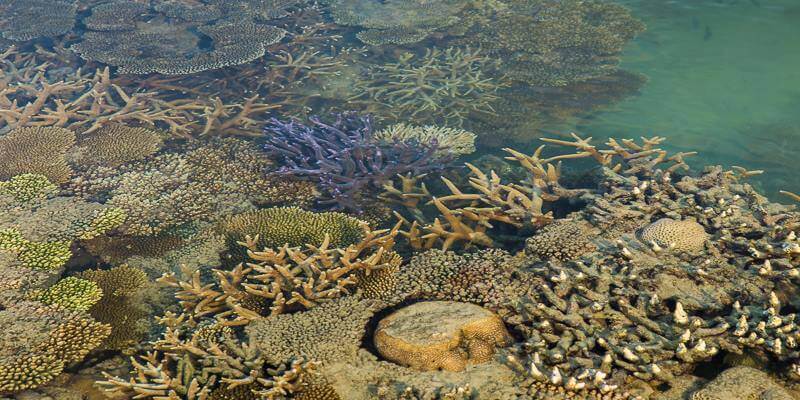 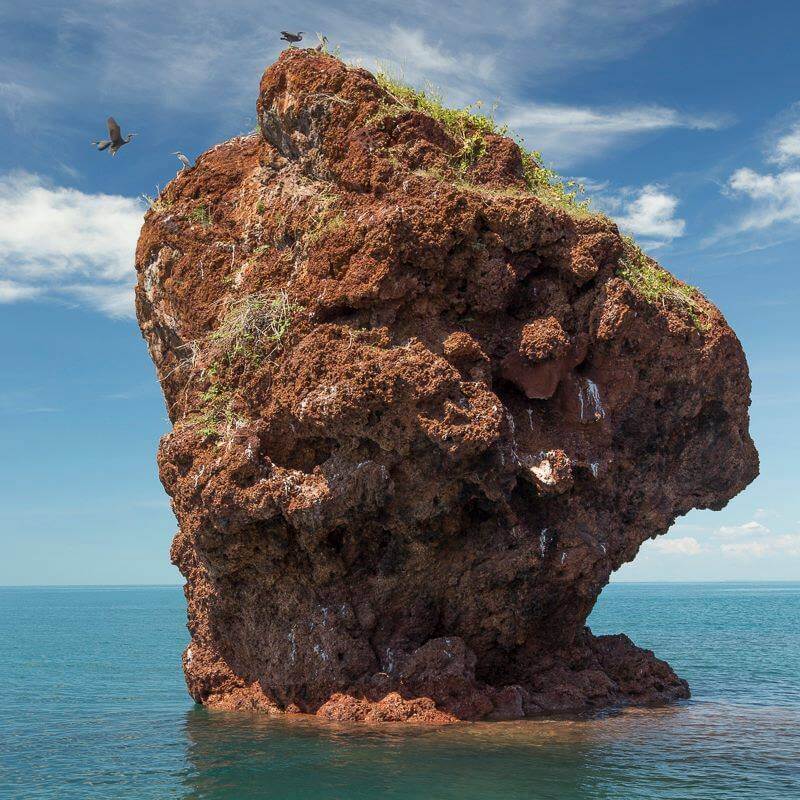 Day 5 saw us at Cassini Island. One of the crew paddled in her kayak to take some shots; watching from shore we could see she was being stalked by a large salty crocodile. The captain went out in the dingy to collect her (just as she was thinking about a quick snorkel!) and they travelled back to shore together. The North Kimberley is beautiful but can be dangerous! 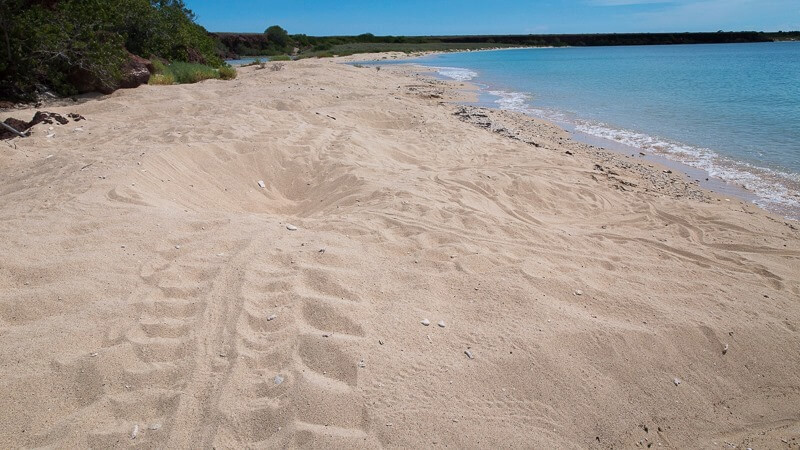 Another highlight of Cassini Island were the Green and Flatback turtle nests – there were so many nests on the beach they looked like bomb holes, with tracks crossing and hollows where the eggs lay. 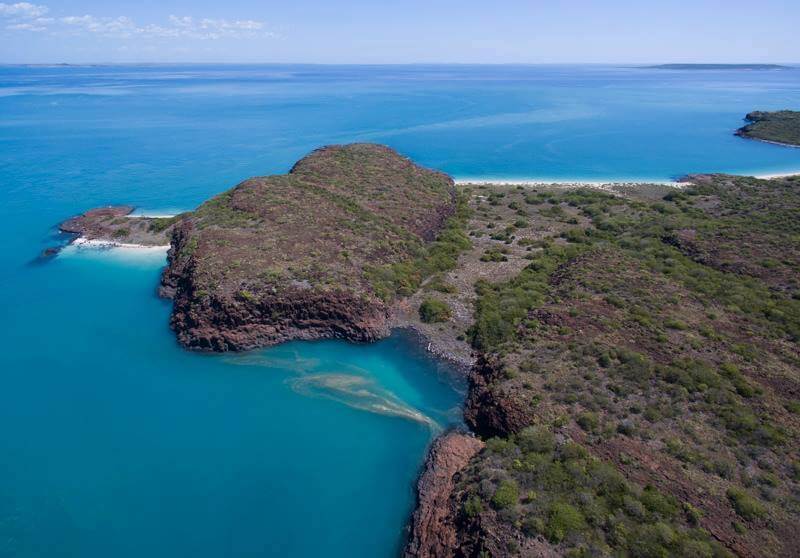 During the trip, everyone took turns driving the boat (with the captain taking on the more challenging steering) and we all helped to pull sails, do chores and cook dinner, with one of the crew as the expedition’s fisherman. We anchored overnight on Day 5 at Cape Voltaire, but strong currents dragged us to deeper waters and we dragged anchor for a mile – luckily our fisherman was fishing all that night and spotted the problem.

We spent Day 6 in the East Montalivet Islands and saw coral spawning; a sign of healthy corals in this region. We saw very little bleaching in the north Kimberley, although there has been bleaching further south. This is another reason to keep this area protected and resilient by banning mining and damaging commercial fishing like gillnets from the proposed North Kimberley Marine Park. 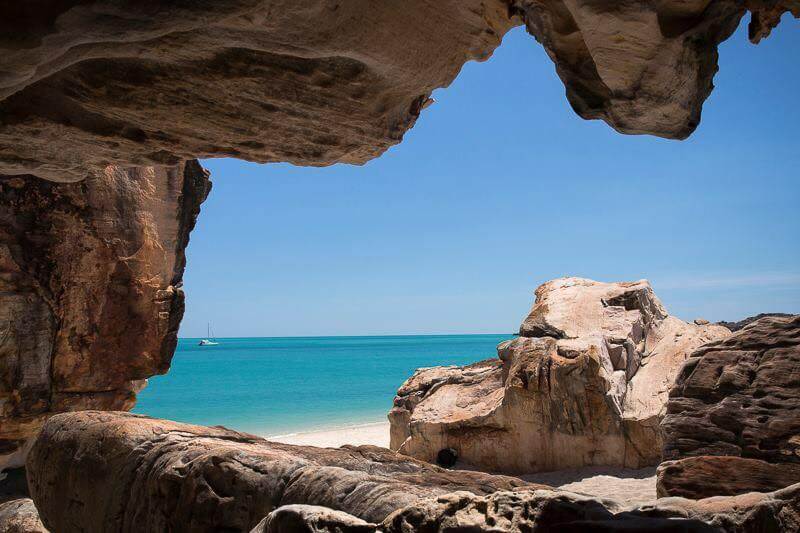 Day 7 was spent at Bigge Island, famous for its astonishing rock art gallery, including Wandjina paintings in the caves. We hiked on the island but due to the lack of water, land-based wildlife was keeping a low profile. Hopefully the rains that have come since our expedition ended will help support the wildlife populations on these remote islands.

Day 8 was spent traversing the Bonaparte Archipelago to get to Booby Island, which is home to 2000 Booby birds and 500 nesting pairs of Crested Terns. The island was covered in birds and the surrounding sea was full of fish – and sharks! We had reef sharks following the dinghy, and when one of the larger sharks almost took a swipe at one of the crew, we decided not to swim! Healthy populations of apex predators like sharks and crocodiles are positive overall though, as they are signs of a healthy eco-system. 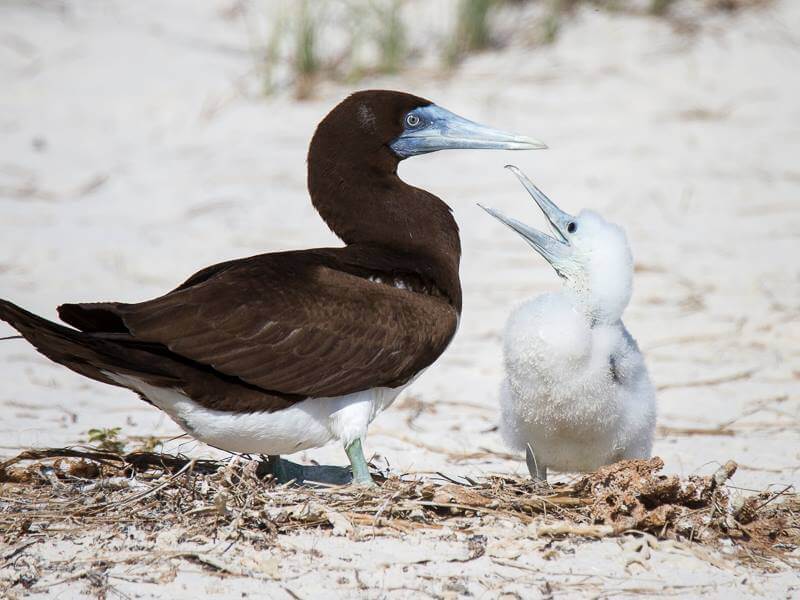 We sailed through the night to get to Adele Island on Day 9. Here we saw large numbers of Booby bird nests along the beach; at first they looked like man-made structures as they were at very regular intervals. It seems that 5 metres is the ideal distance for the birds to be good neighbours! 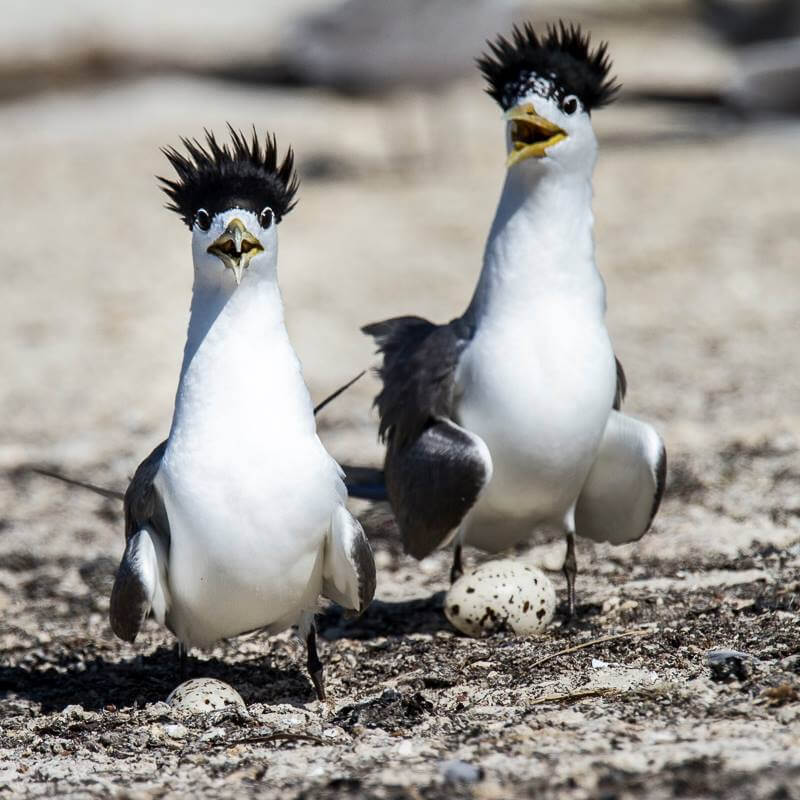 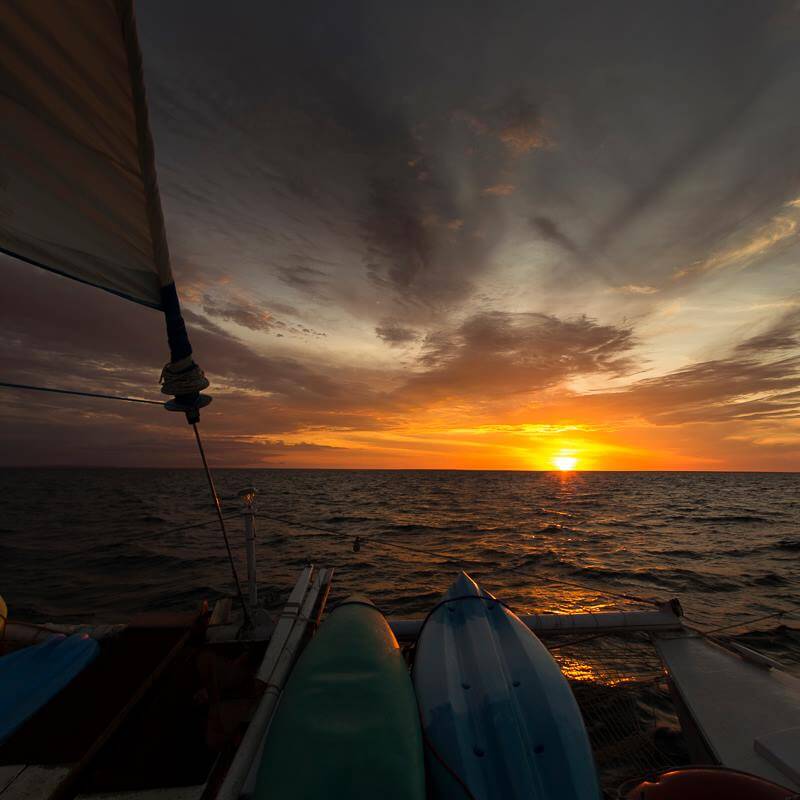 By Day 10 we were on the way home. With fresh water supplies running low, we needed to head back promptly, so we sailed all night and all day to get to Cape Leveque Caravan Park, where the crew got off and we celebrated the end of an amazing voyage through the North Kimberley. We were all moved the beauty of this amazing coast and hope that the images will help raise awareness of the need for greater protection for the region. You can help now by signing the petition to protect the North Kimberley.