The State of Environment report has sent a stark warning for the future of the Martuwarra Fitzroy River and other freshwater ecosystems if action isn’t taken to protect them from large-scale irrigation development.

The report, which was released on Tuesday by Federal Environment Minister Tanya Plibersek, revealed Australia’s natural environment is under more pressure than ever before, and our wild rivers, heritage and native species are suffering. 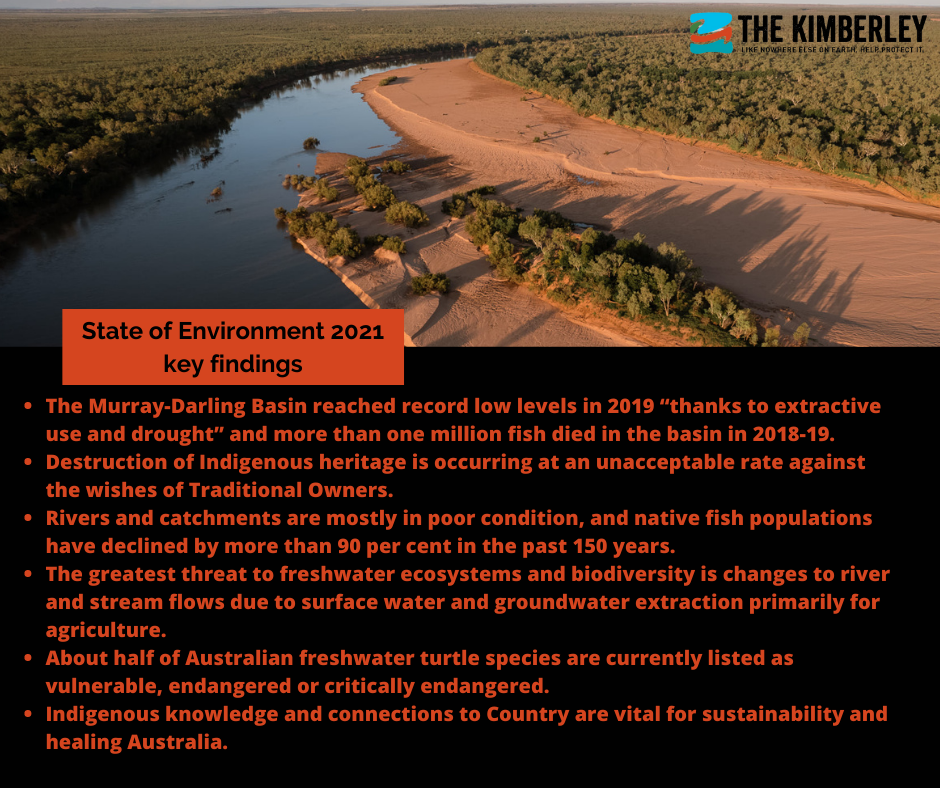 According to the report the greatest threat facing freshwater ecosystems and biodiversity were changes to river and stream flows through surface water and groundwater extraction for agriculture, while water and soil quality could also be altered.

It revealed Australian rivers and catchments are in mostly poor condition, while native fish populations have declined by more than 90 per cent, and about half of our freshwater turtle species are now considered vulnerable, endangered, or critically endangered.

In 2019 the Murray-Darling Basin reached record low levels due to water extraction and drought, causing the death of more than a million fish.

The environmental review also found that Indigenous heritage sites have been disappearing at an alarming rate against the wishes of Traditional Owners.

The Kimberley – Like Nowhere Else campaign coordinator Monique Barker said the report findings sent a very clear message that protection of the Martuwarra Fitzroy River must be a priority.

“These results are shocking and are an urgent warning on what the future of the Martuwarra may look like if large-scale irrigation proposals are approved and more isn’t done to protect this National Heritage listed river,” she said.

“Our freshwater ecosystems are seriously suffering. We’ve seen the damage that has been caused to the Murray-Darling due to water extraction and the effects of climate change, and the WA Government must listen to the findings of this report and act before it’s too late.”

The report overwhelmingly recommended the use of Indigenous knowledge to create a broad vision for sustainability in Australia, and that governments must work with Traditional Owners to protect, restore, and manage Country.

Ms Barker said Aboriginal people had been managing water and the environment for tens of thousands of years.

She said the Western Australian Government must hear and respond to the voices of Traditional Owners who have called for protection of the Fitzroy River and its surface water flows for more than two decades.

“Martuwarra Traditional Owners have never consented to large-scale extraction from the Fitzroy River, yet scenarios to take up to 300 billion litres of surface water from the river are still being considered by government. That is more water than Perth and the Southwest residents use in an average year,” she said.

“The Martuwarra is still a healthy, wild, free-flowing river. We have the opportunity to learn from the mistakes made in other parts of Australia and ensure it continues to flow.”