New research has revealed that the growth and survival of critically endangered sawfish are impacted by low water levels in the Fitzroy River, prompting further concerns over bids to extract water from the river.

The study, from the Murdoch University’s Harry Butler Institute, found that sawfish on average lose around 10% of their body mass each year during the long dry season due to them being unable to catch enough prey.

The new research also cautions that changes in the Fitzroy's water level due to climate change or water extraction could further impact the health of sawfish populations in the river.

She said the research was extremely important due to the Fitzroy River being the last known intact nursery for the freshwater sawfish.

“Productivity and food availability in the Fitzroy River are highly dependent on the level of wet season flooding. Larger floods pull in more nutrients and increase the amount of fish and crustaceans in the river for sawfish to eat,” she said.

“Following larger floods, we could physically see that sawfish were fatter, as they had had more opportunity to feed while the floodplains were inundated. This species uses the Fitzroy River as a nursery habitat for its first 4-6 years of life, so the higher growth rates of sawfish during high volume wet seasons can help this species to reach maturity.

“The Fitzroy River is considered the last stronghold for the species, whose global population has disappeared by more than 60%.

"We are lucky in WA to still have healthy populations of four of the world's five species of sawfish, largely due to the intact nature of our northern coastline and the preservation of essential habitats like the Fitzroy River. I am thrilled to be part of the long-term monitoring of sawfish in WA and hope that this research will contribute to the conservation of these unique animals.”

The Kimberley – Like Nowhere Else campaign coordinator Monique Barker welcomed the findings of the research and said it highlighted the importance of floodwaters for the river’s unique ecosystem and wildlife.

“The Fitzroy River is not a boundless source of wasted water - in reality the river is parched in as many years as it floods. Proposals to divert floodwaters would seriously disrupt the fragile natural cycle of this desert river,” she said.

“Critically endangered sawfish, iconic barramundi and all river life depend on the occasional wet-season floods to clean and replenish their habitat.

“Flood water harvesting has led to the ecological collapse of rivers in the Murray Darling Basin. It is critical we listen to the research and use the nearly two decades of data on sawfish in the Fitzroy to ensure that any potential developments in the region do not harm the National Heritage listed Fitzroy River, its tributaries and floodplains.

“This Saturday October 17 is International Sawfish Day, where we raise awareness for sawfish, who are amongst the 100 most endangered animals in the world. We hope important new research like this will encourage the WA Government to protect the Fitzroy River and its extraordinary wildlife.” 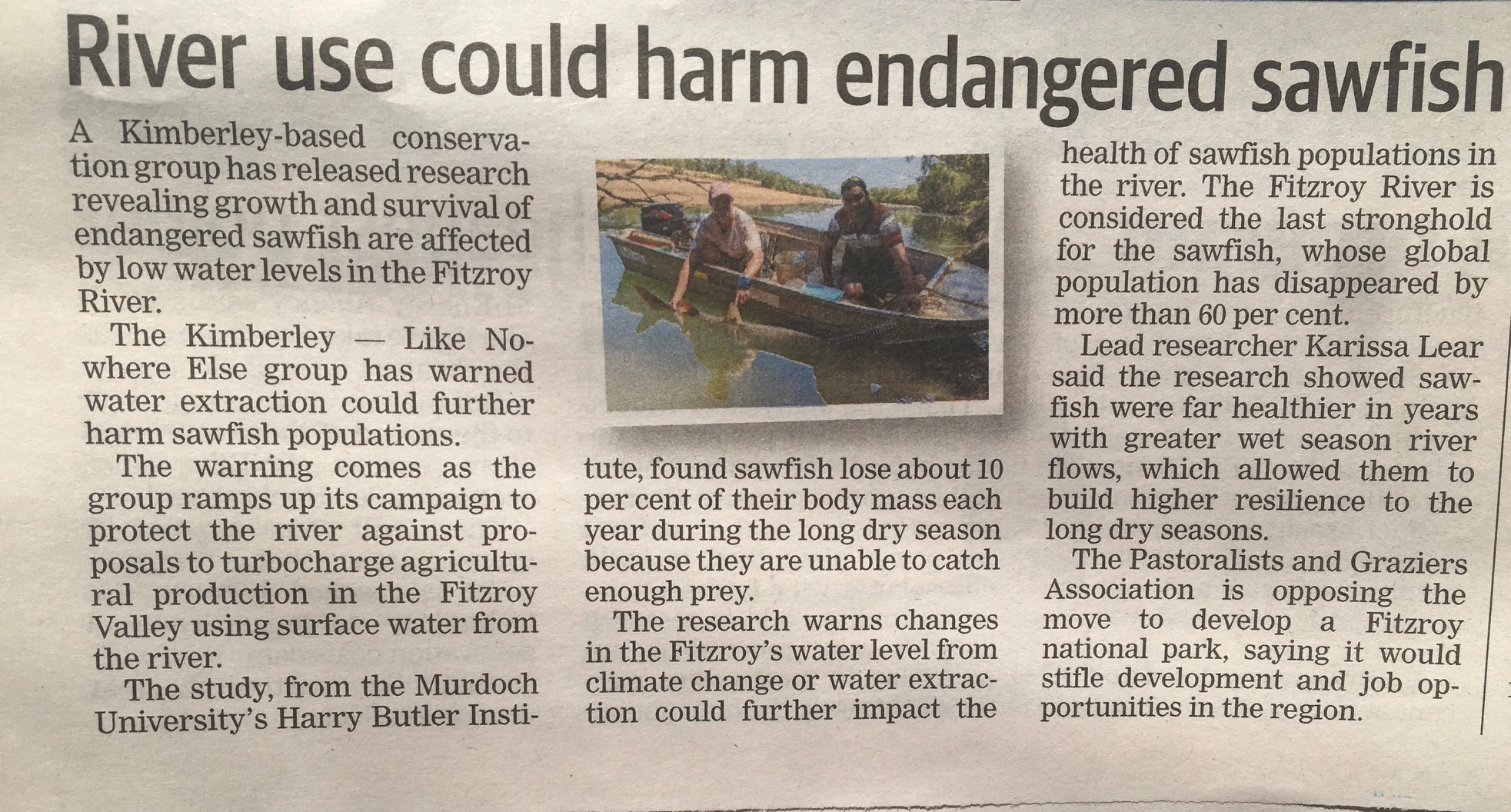