Hidden at the heart of the Kimberley are a group of one thousand islands, known as the Buccaneer Archipelago. Not many tourists or even Kimberley locals have explored this amazing place, but Jason from the Kimberley - Like Nowhere Else team recently took on the challenge.

After 2 weeks of sailing with scenery to die for, hundreds of islands, thousands of waterfalls, a cyclone and a lot of big crocs we brought back these pictures to show you:

We started out with clear skies in Broome, with a 24 hour sail up the Dampier peninsula rapidly leaving behind any trace of civilisation. 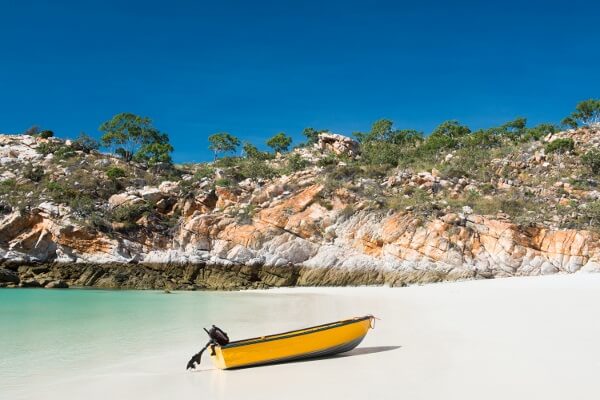 We sailed through the Northern Buccaneer islands passing Godsmark Island, King Hall Island and Powerful Island, coming to a standstill when the tide turned - we had to detour around Byron Island to reach the incredible Silica Beach. Surrounding beaches are either muddy or yellowish in colour but by some freak of nature Silica Beach is pure white and squeaky when you walk on it. 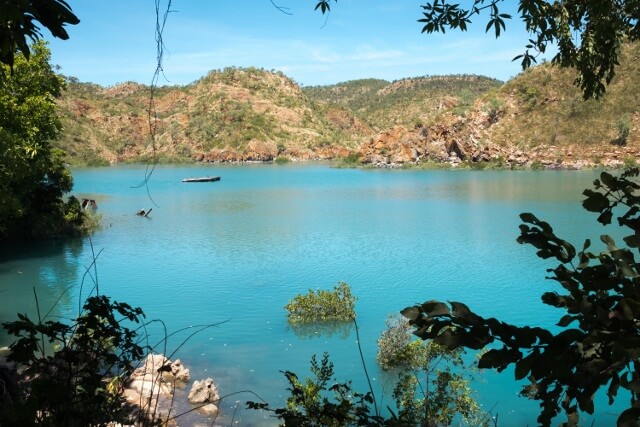 Silvergull Creek has large water tanks which were built by BHP in the 1950s to supply the nearby Koolan Island Iron Ore mine with freshwater. Today visitors can swim in the tanks and resupply with beautiful freshwater. The Dambimangari Rangers have taken over the camp and are rebuilding it to create an artists residency and gallery to sell artwork to passing cruise ships. We sat in the camp chatting to the rangers and watched a big croc lazily swim by. 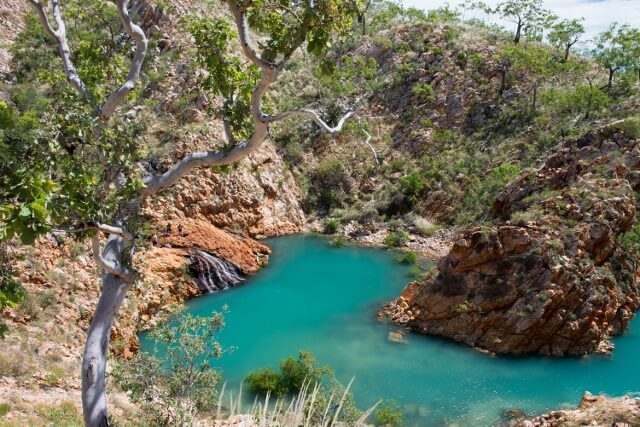 With a developing tropical cyclone heading our way we decided to go right up into the gorge at the end of Crocodile Creek and take shelter next to a beautiful waterfall. We saw a big croc on the way in which made us slightly nervous while clambering over rocks collecting big black lipped rock oysters for dinner. 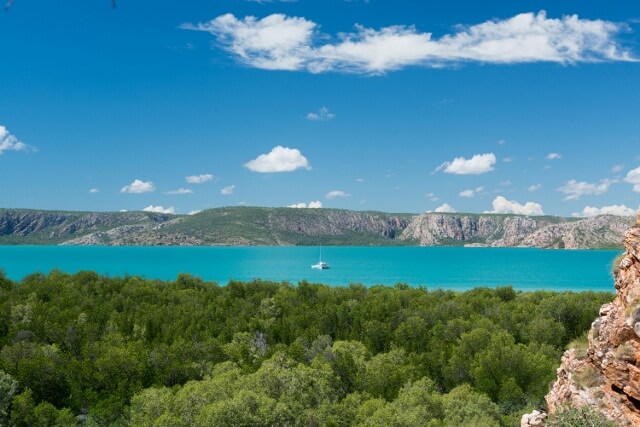 The cyclone turned out to be a fizzer so we headed out into Yampi Sound passing Koolan Island and into the wild tidal rapids of 'The Gutter' which is a narrow passage leading into Talbot Bay. With a strong tail wind we sailed south weaving our way through hundreds of islands to anchor in the majestic Dugong Bay. 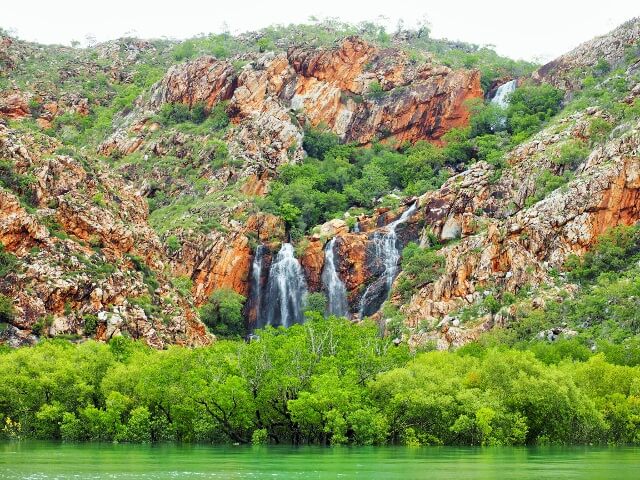 Wow this place should be called waterfall bay! There are numerous waterfalls cascading off the huge escarpments into the sea with at least three large falls to swim in. We caught some beaut mangrove jack whilst casting lures off the waterfalls making for a very tasty dinner. Three crocs greeted us when we returned to the yacht and kept us company throughout the night. Disaster struck when we lost a drone while trying to film one of the gorges and after hiking and searching for 4 hours we could not find the drone. I’m very glad this magnificent bay is now protected within the Horizontal Falls Marine Park. 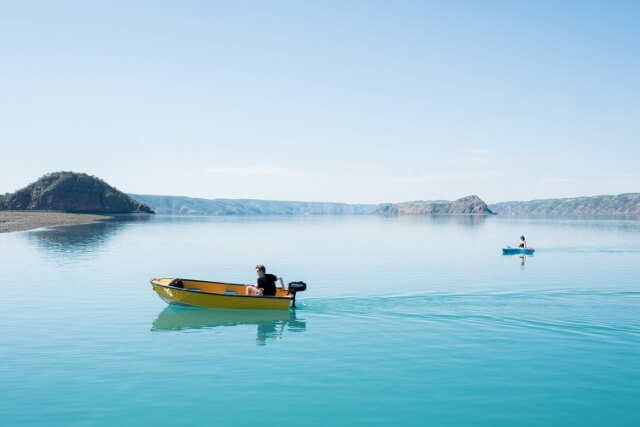 We decided to leave the waterfalls and wove our way through more islands and anchor next to the vast Turtle Reef in Talbot Bay.  This reef is very different to your typical coral reef. All the corals are miniaturised and look like a sprawling bonzai garden. Turtles are everywhere! We ate dinner while watching a very large box jellyfish hunting the little fish hiding at the back of the yacht. Beautiful but deadly! This reef is now protected in a sanctuary zone, which is well deserved as the ecological values of the area are very obvious. 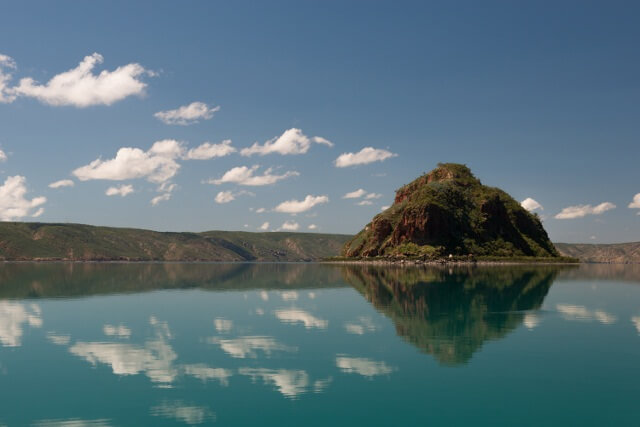 The next morning we dropped some of the crew at the entry to the Horizontal falls and they set off on a very challenging hike to try and photograph the true power of this miracle of nature.

After lunch we picked up our sweaty and scratched photographers and hitched a ride on the rapidly dropping tide, sucking us out of Talbot Bay to end up at Dogleg Creek in Yampi Sound to have a chat with the boys at the fuel barge moored there. The real reason we stopped at Dogleg Creek was to buy ice cream at the only shop in this area! 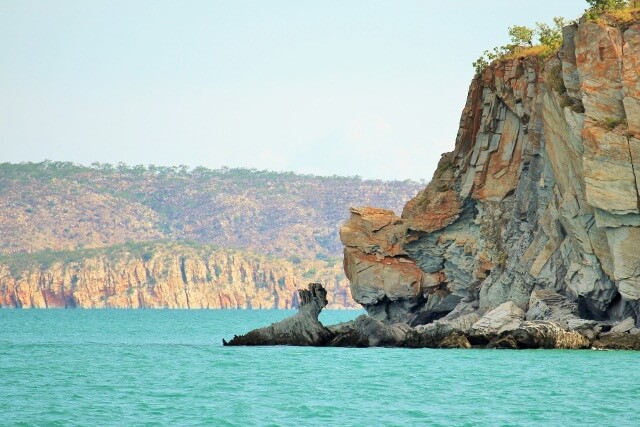 The quickest way to reach Strickland Bay is via a long winding passage known as Whirlpool Pass. As we approached this rather treacherous pass the crew became rather agitated. To prevent a full blown mutiny the skipper had to veer away and take the long, safe route around Hidden Island. The skipper was defeated but the crew were happy. A family of Australian humpback dolphins accompanied us for much of the day as we weaved through hundreds of islands to arrive at the towering escarpments of Strickland Bay. 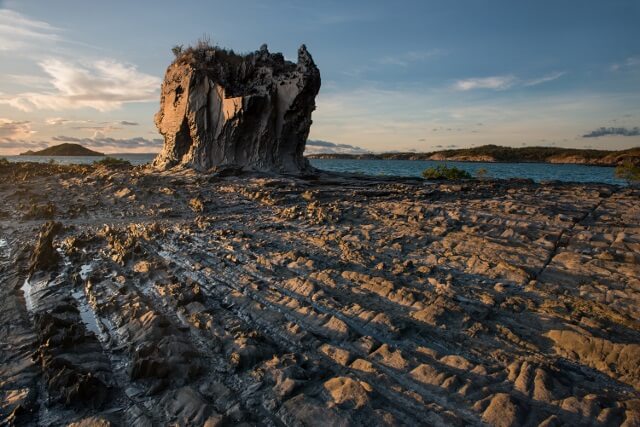 We were stunned by the beauty of the Edeline Islands. The islands are beautifully sculptured by nature with many large grey rocky outcrops resembling the gothic architecture of Europe. To the east lies the Graveyard, a large uncharted bay dotted with islands containing graves from the old pearling days. We found a headstone of a Filipino pearl diver dated 1891. Eerie but beautiful.

With a low tide and unreliable charts, we had to very carefully navigate around sharp reefs and unnamed islands flanking the Gerald Peninsula to eventually enter the safety of Cone Bay. On the western side of Cone Bay is a lovely waterfall. After a short climb up the falls we found an old hippie commune built in the 1970s, consisting of a few hand built stone cottages complete with rainbow paintings, murals and strange quotes from eastern mystics.

That afternoon we crossed King Sound, which always keeps you on your toes. 10 knots of current, and wild whirlpools flung the yacht around in a confused sea. The crew were relieved to reach the safety of Cape Leveque, the skipper enjoyed the wild ride. 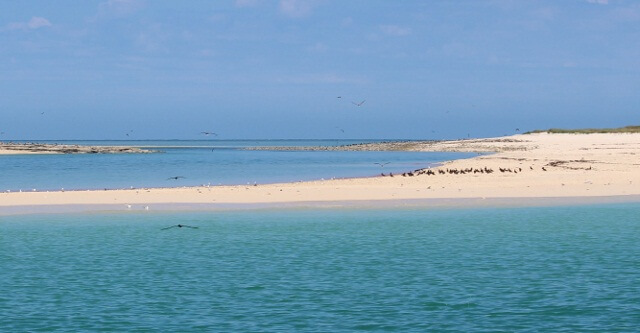 The Lacepedes are WA’s version of the Galapagos. Tens of thousands of seabirds circle overhead, you have to get used to the constant rain of bird droppings. The beaches are entirely dug up with turtle nests and the higher ground is dotted with booby nests each with one fluffy white booby chick waiting for their parents to return with food. The surrounding sea is milky with baby fish and punctuated with feeding turtles. The afternoons entertainment consisted of watching the leaping mullet and thrashing sharks and queen fish in the constant dance of predator vs prey. It is astounding that this area which is bursting with wildlife is not yet protected in a marine park.

We set sail straight into a blustery southerly wind. This made for slow going and after pounding into the seas all day we finally reached the safety of Broome Port. The crew were awe struck by the natural beauty of the Kimberley coast, however we looked forward to a hot shower after two weeks at sea!

You can add your support to protect the Buccaneer Archipelago by signing our petition here.