The threat facing the Martuwarra Fitzroy River is a big problem, so we have gone big with our promotions; and put it on a bus!

Check out our new Fitzroy River bus adverts, which are travelling around Perth.

If proposals to pump huge amounts of water out of the Fitzroy River are given the green light, this Kimberley life force will be put on the path to becoming the next Murray Darling style disaster.

Over the next month, two Transperth buses will be driving around Perth with adverts highlighting the serious risk to the Fitzroy River. We're spreading the message far and wide that the Fitzroy River needs to be protected.

The WA Government is weighing up whether to allow huge amounts of water to be taken from the River. One option being considered involves pumping a massive 300 billion litres a year from the Fitzroy River – which is more water than what the two million people of Perth and the South West use in a year!

The spectacular bus advertisements have already made headlines in WA, with a story in today's West Australian newspaper. Read the story online here. 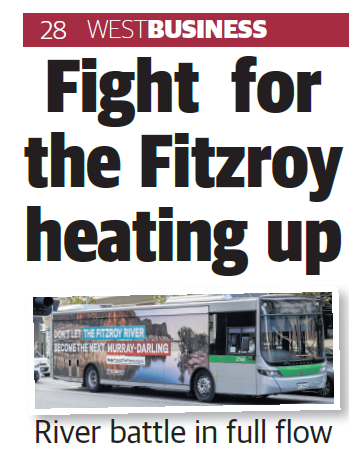 If you haven't already, please take action and send a submission to the WA Government to protect the Fitzroy River!