Australia’s first co-designed marine parks with Traditional Owners have been declared in the Buccaneer Archipelago off Western Australia’s Kimberley coast.

The marine parks, which were announced by Traditional Owners and Environment Minister Reece Whitby yesterday in Broome, will cover 600,000 hectares of sea country along the Kimberley coast-heralded as the most pristine tropical coastline left on earth.

The new marine parks will be added to the existing marine conservation network in the Great Kimberley Marine Park, covering more than 3.1 million hectares of protected coastline.

The Kimberley – Like Nowhere Else alliance organisations, The Pew Charitable Trusts, and Environs Kimberley, have been supporting the creation of the Great Kimberley Marine Park for over a decade, working with Traditional Owners, the WA Governments, local communities, and stakeholders.

The Pew Charitable Trusts Australia Program Deputy Director Tim Nicol congratulated the Bardi Jawi, Mayala and Dambeemangarddee Traditional Owners and the WA Government and said it was a historic moment for Australia.

“The recent State of the Environment Report highlighted the importance of incorporating Indigenous knowledge and leadership in the protection of cultural heritage and the environment.  These new marine parks have raised the bar on what is possible in working closely with Traditional Owners and have taken a step towards achieving this in our marine environment.

“Well-managed, carefully designed and highly protected marine parks are critical to help threatened species and ecosystems survive and thrive in the face of climate change, pollution, and overfishing.

“The Buccaneer Archipelago is still relatively pristine but faces increasing pressures.  Traditional Owners will now have new tools to work closely with Government to ensure their sea Country remains healthy for the future.”

The marine parks will safeguard the pristine waters of the thousand Islands of the Buccaneer Archipelago – providing an oasis for humpback whales, sea turtles, dolphins and corals found nowhere else in the world. They will also support sustainable economic opportunities through tourism, research, and conservation enterprises.

The Buccaneer Archipelago has WA’s highest concentration of Traditional Owner communities living adjacent to a marine park. The cultural zones will ensure Traditional Owners are still able to sustain themselves from the marine environment, while helping to protect saltwater culture.

The marine parks include significant areas that have been left open for recreational fishing access, which will remain an important use of the park outside of restricted zones.

He said the parks would protect a key nursing area for humpback whales.

“The co-design of these marine parks with Traditional Owners sets an example to governments across Australia on how best to conserve our natural world. This process has shown that the knowledge and experience of Traditional Owners is vital for world class conservation outcomes,” he said.

“The McGowan government now has an opportunity to complete the Great Kimberley Marine Park – protecting the Kimberley coast from the Pilbara to the Northern Territory border by fulfilling their election commitment to protect Adele Island and Beagle and Mavis Reefs, which are west of the Buccaneer Archipelago.

“The Dampier Peninsula also requires finishing to ensure its protection, including the Lacepede Islands, and the coastline between Roebuck Bay and Eighty Mile Beach Marine Park. Once complete, the Great Kimberley Marine Park will rival the Great Barrier Reef as a global conservation icon and attraction.” 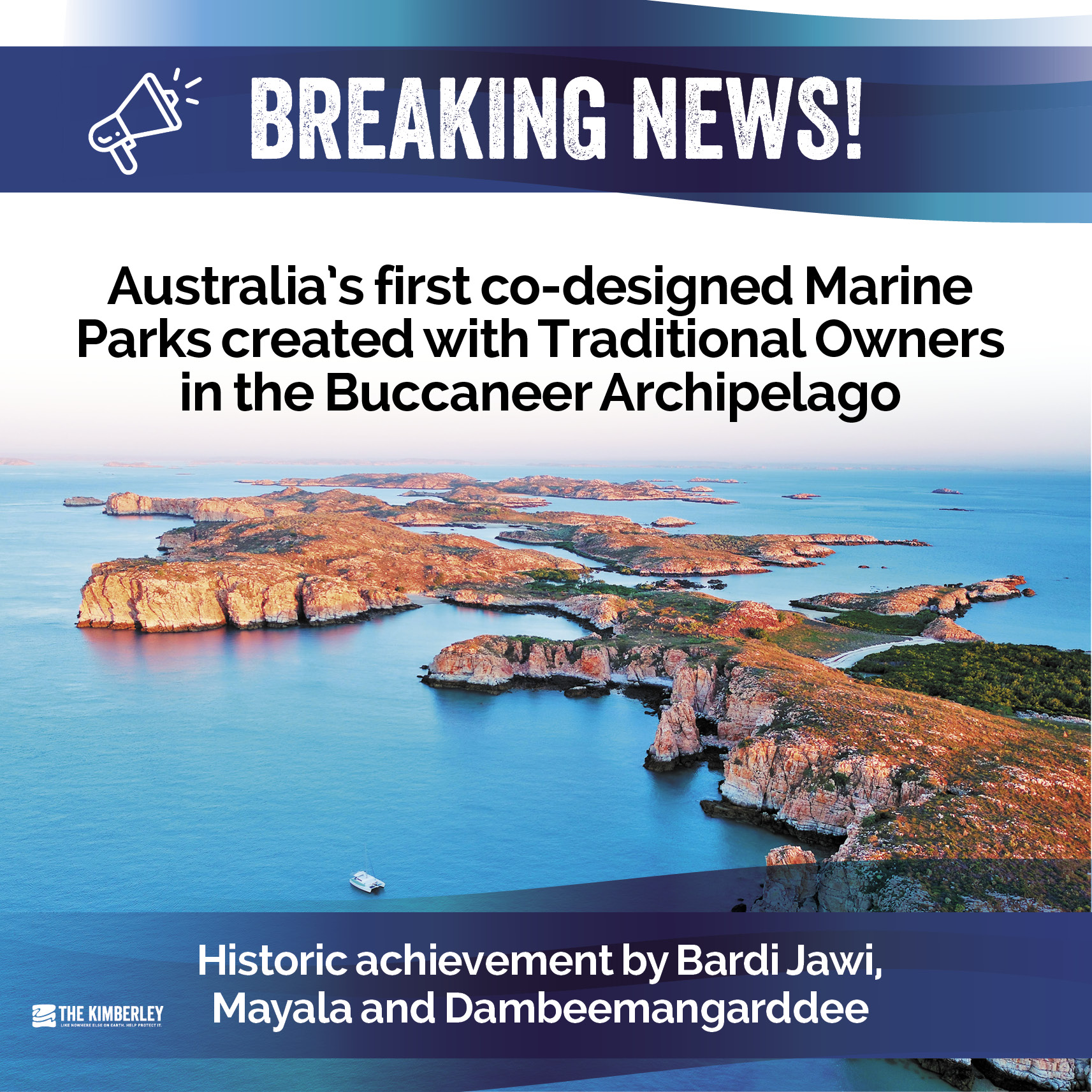