At the 2017 state election, the incoming Labor Government committed to extending the Great Kimberley Marine Park to include the thousand islands of the Buccaneer Archipelago and the fringing coral reefs that surround them.

Important work has begun on this commitment, however, there had previously never been an official commitment to include the reefs of Adele Island, Beagle and Mavis within the outer boundaries in this new and important marine park.

Over 1850 passionate Kimberley supporters contacted the Environment Minister, telling him that these remote and pristine coral reefs deserved world-class protection.

The Environment Minister listened to the community and recently confirmed the intent to include Adele Island and Beagle and Mavis reefs in the proposed Buccaneer Archipelago Marine Park!

Minister Dawson reflected on the outstanding natural values of these reefs, including being important feeding areas for seabirds and waders. He agreed that the inclusion of these areas in the States marine reserve system would complement the existing class A nature reserve at Adele Island and the protection provided by adjacent Commonwealth marine parks.

The protection of these pristine reefs will be a win for marine life, and for all Australians for the future.

Some of the hundreds of personal messages sent to the WA Environment Minister are below:

"I have personally visited Adele Island on WA Museum biological survey expeditions. My recollection of it was as a gem, particularly for breeding seabirds and surrounding reefs. I cannot imagine why it wouldn't be included in Buccaneer Marine Park."

"We visited Adele Island in 2014 and found the island and reef to be an amazing experience, when coupled with the bird life. It ranks with the Rowley Shoals for example, as a pristine environment, which needs to be preserved. We applaud your initiative in creating the Buccaneer archipelago Marine Park but to exclude the waters of Adele island would be a travesty. We urge you to include these waters around the island, as well as the island, in the proposed Buccaneer Marine Park."

"This is an opportunity for us as a state to act positively for the future wellbeing of Adele Island. Please give this high priority and make us all proud of conserving what is unique and precious for future generations. Thank you."

"I have been lucky enough to visit these Islands and seen the beauty and natural protection of their isolation. Please include them in your protected area, as the Kimberley is becoming less and less isolated with more and more boats offering Kimberley trips to these beautiful Reefs. You can do it now, whilst you are committing to protect the nearby areas."

Thank you to everyone involved in securing this commitment to protect these important reefs! 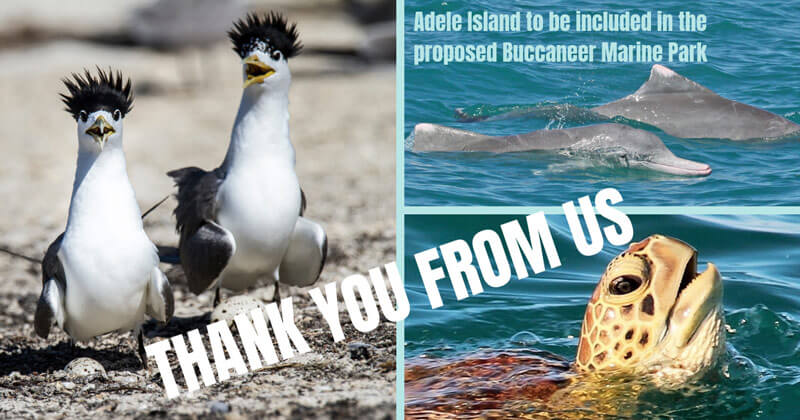