In 2022, thanks to your support, we made encouraging progress in our efforts to keep the Martuwarra free-flowing, but there is still work to be done in 2023 to stop the threat of large-scale irrigation.

Here are a few highlights of what we achieved together this year:

In early 2022 we screened the inaugural Martuwarra Fitzroy River Film Festival in Bassendean to over 300 people in partnership with our friends at the Kimberley Land Council and Environs Kimberley – sharing stories of the Martuwarra and the people working hard to protect the river from large-scale irrigation threats.

The film festival has been a huge success and has since been shown around Perth, Broome and Fitzroy Crossing – inspiring audiences to join Traditional Owners and help protect this beautiful free-flowing river. 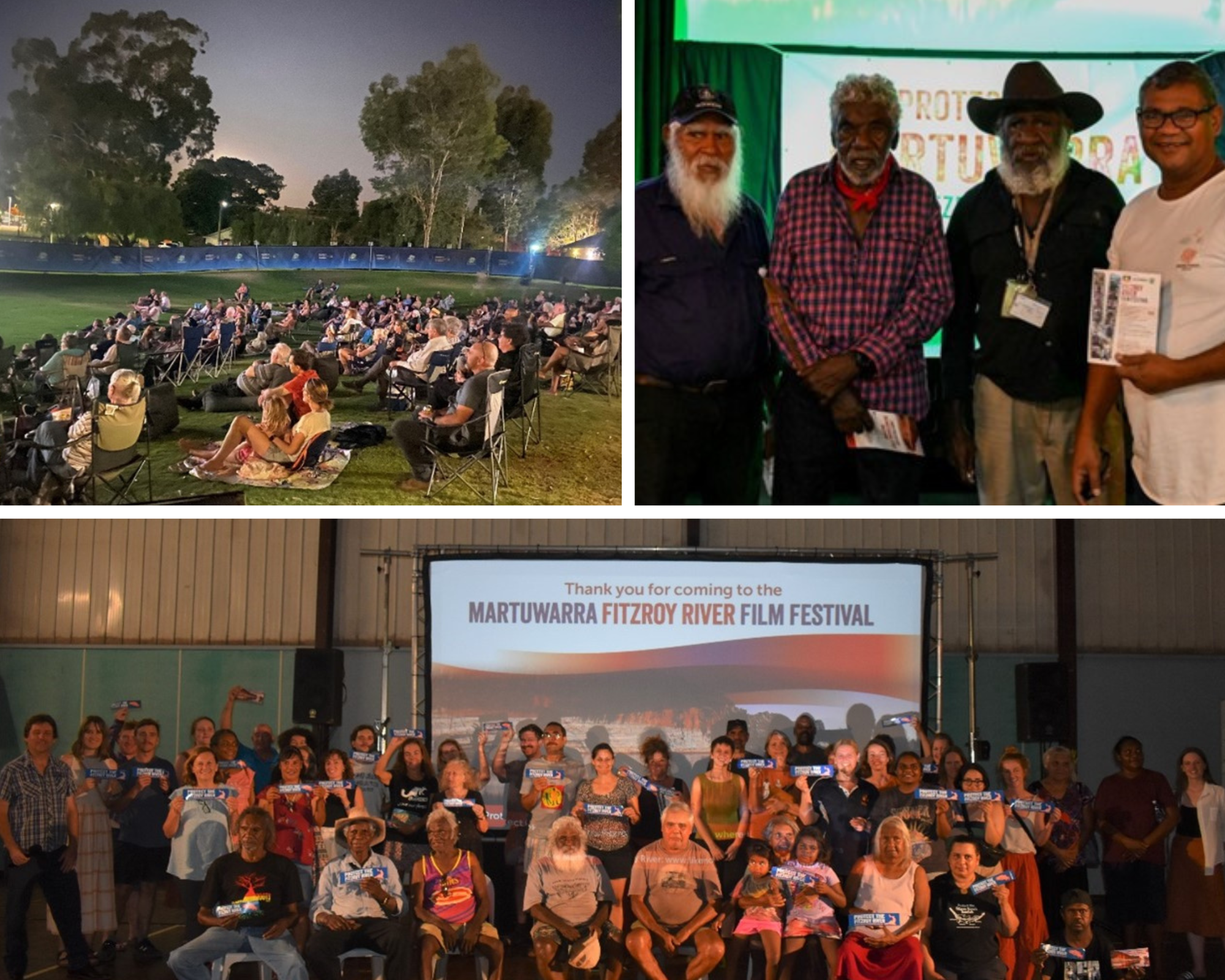 Community members across Perth, Broome and Fitzroy Crossing at the screenings of the Martuwarra Fitzroy River Film Festival.

In April we celebrated the creation of Warlibirri National Park.The national park protects Gooniyandi country near Fitzroy Crossing where the Margaret River – a major tributary of the Martuwarra Fitzroy River - flows out from the spectacular Margaret Gorge and Mueller Ranges.

This is a huge achievement by Gooniyandi Traditional who’s dedication has helped to protect culture and country, and will create sustainable jobs for the future.

Covering 16,000 hectares of Gooniyandi country, Warlibirri National Park was the first milestone in the delivery of the McGowan Government’s election commitments to create the Fitzroy River National Park. We look forward to progress of National Parks on Bunuba and Kija country in 2023. 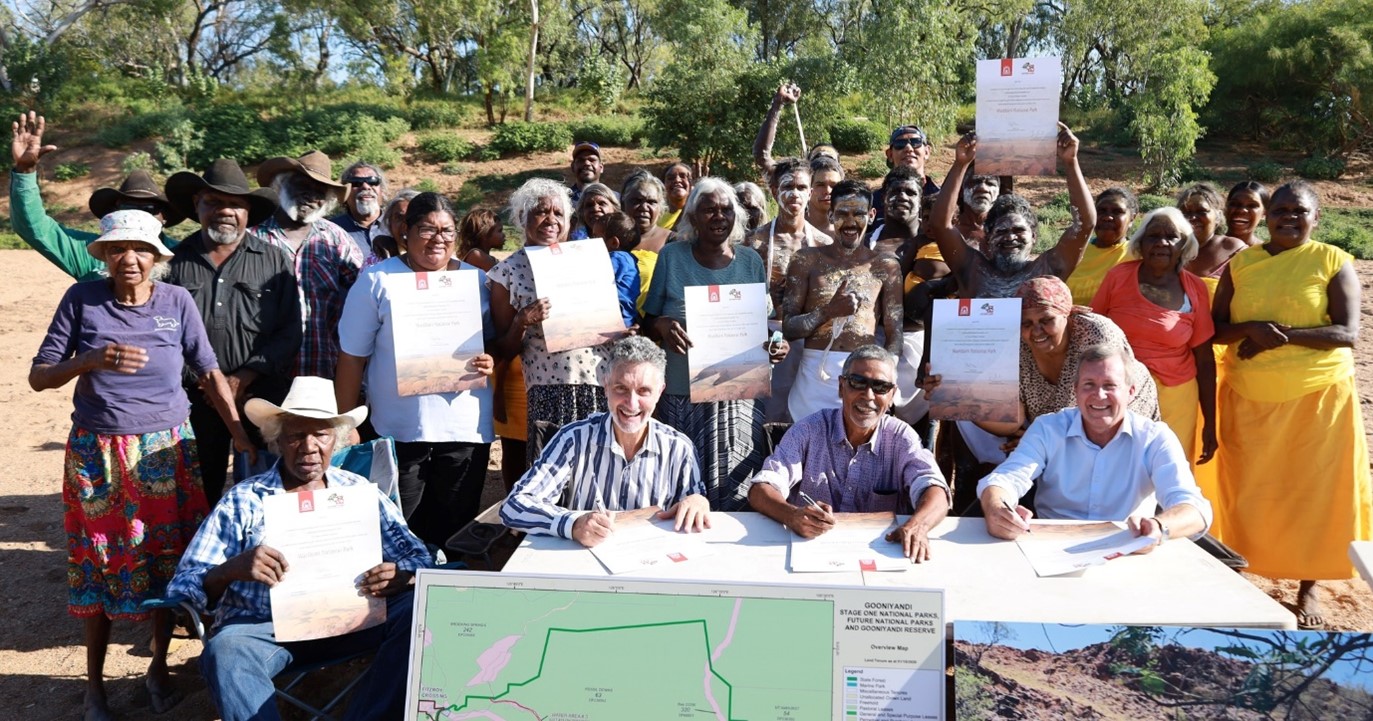 In July three new marine parks were created in the Buccaneer Archipelago, covering 660,000 hectares and protecting an oasis of marine life including whales, turtles, dugongs, fish and coral reefs.

The Bardi Jawi Gaarra, Mayala and Maiyalam marine parks were the first of their kind in Australia to be co-designed and co-owned with Traditional Owners – with special purpose cultural zones protecting Aboriginal saltwater culture.

This was a historic moment by Bardi Jawi, Mayala and Dambeemangarddee Traditional Owners and their connection to sea country. 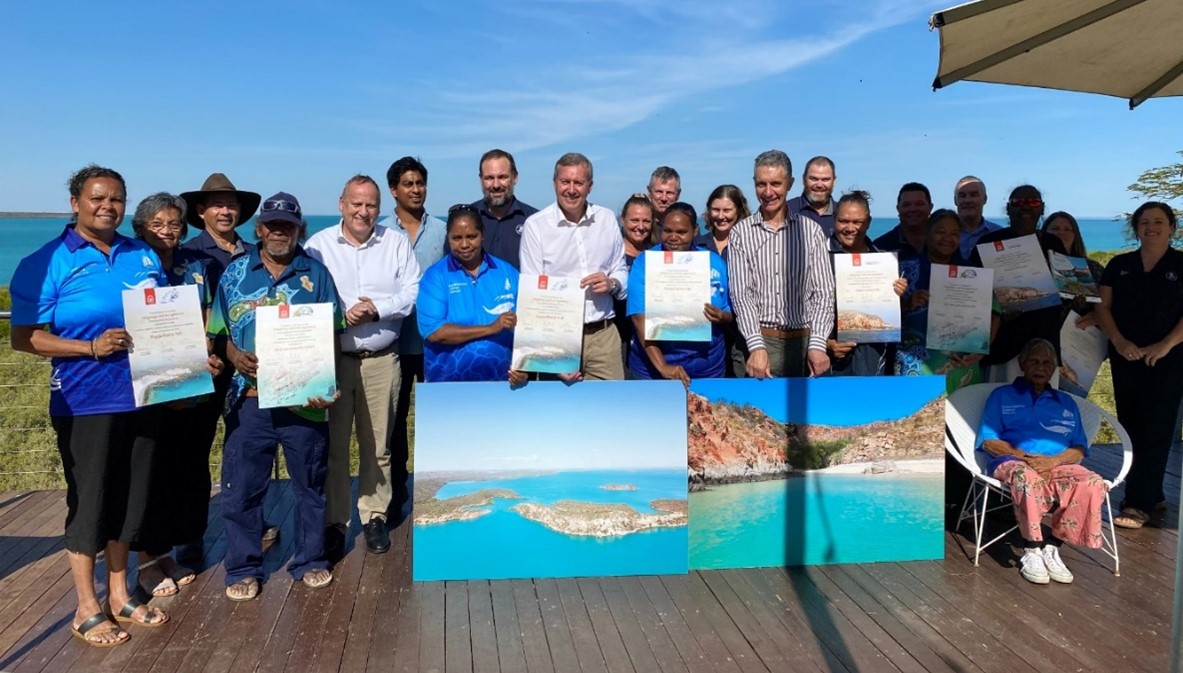 The exhibition includes stunning photography by Damian Kelly and Adam Monk, our spectacular seven-metre sawfish art installation, plus the award-winning web series Voices of the River.

For Perth based folks, there’s still time to check out the exhibition which is on display until January 29, 2023. 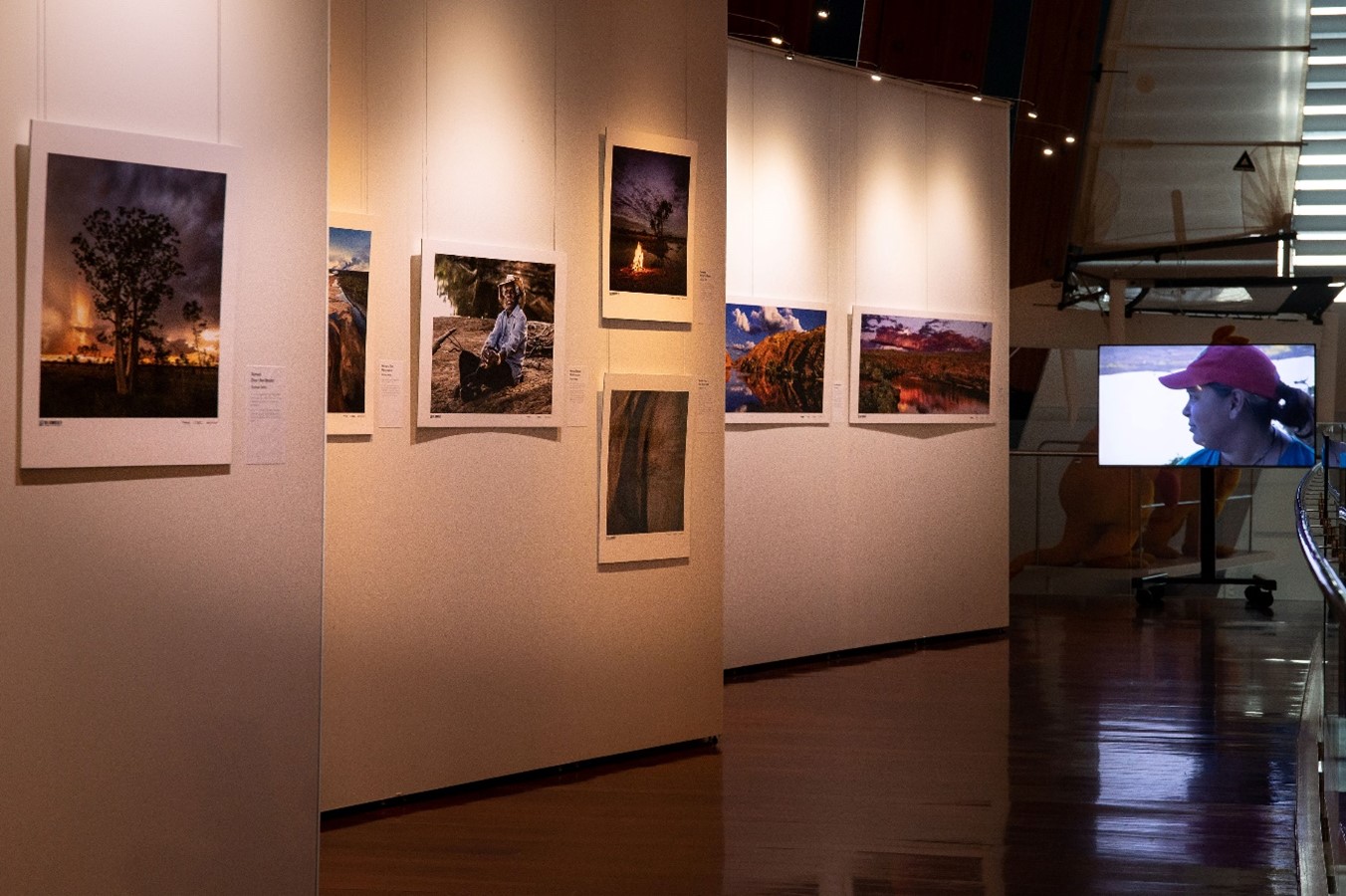 A huge year of community support

We’ve attended over 40 community markets this year across WA, with almost 3000 of you signing our petition bringing our total number of petition signatures to over 26,000 – a huge achievement! This year, hundreds of you also sent messages to your local MP urging them to support protection of the Martuwarra.

Thank you to everyone who has taken the time to sign our petition or have a chat at our markets, and a huge thank you to our trusty volunteers. We look forward to being back out in the community again in 2023. 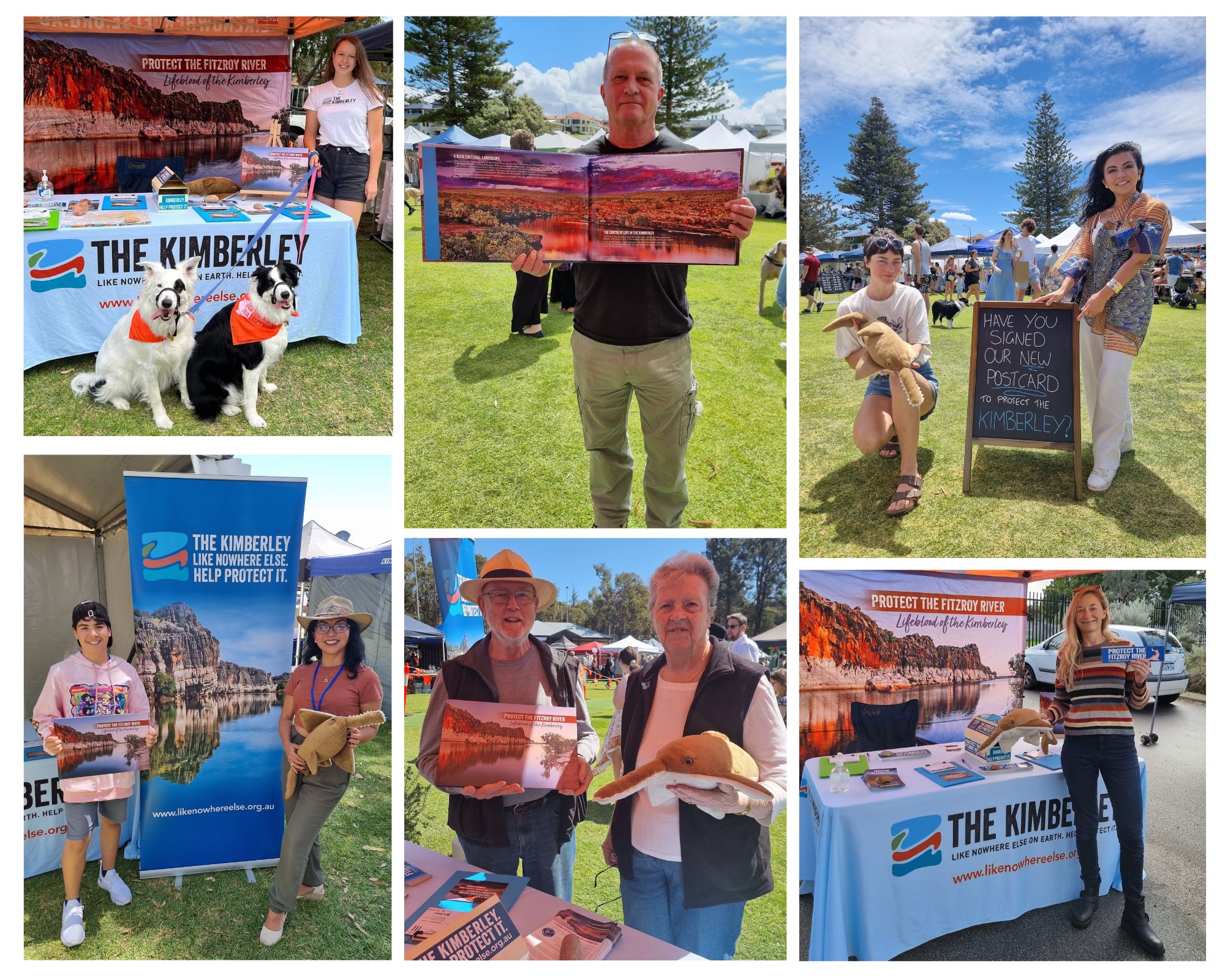 Today we delivered two giant Christmas cards to Premier Mark McGowan and Environment Minister Reece Whitby signed by more than 1500 of you, calling on them to make our collective Christmas wish come true and protect the Martuwarra Fitzroy River. 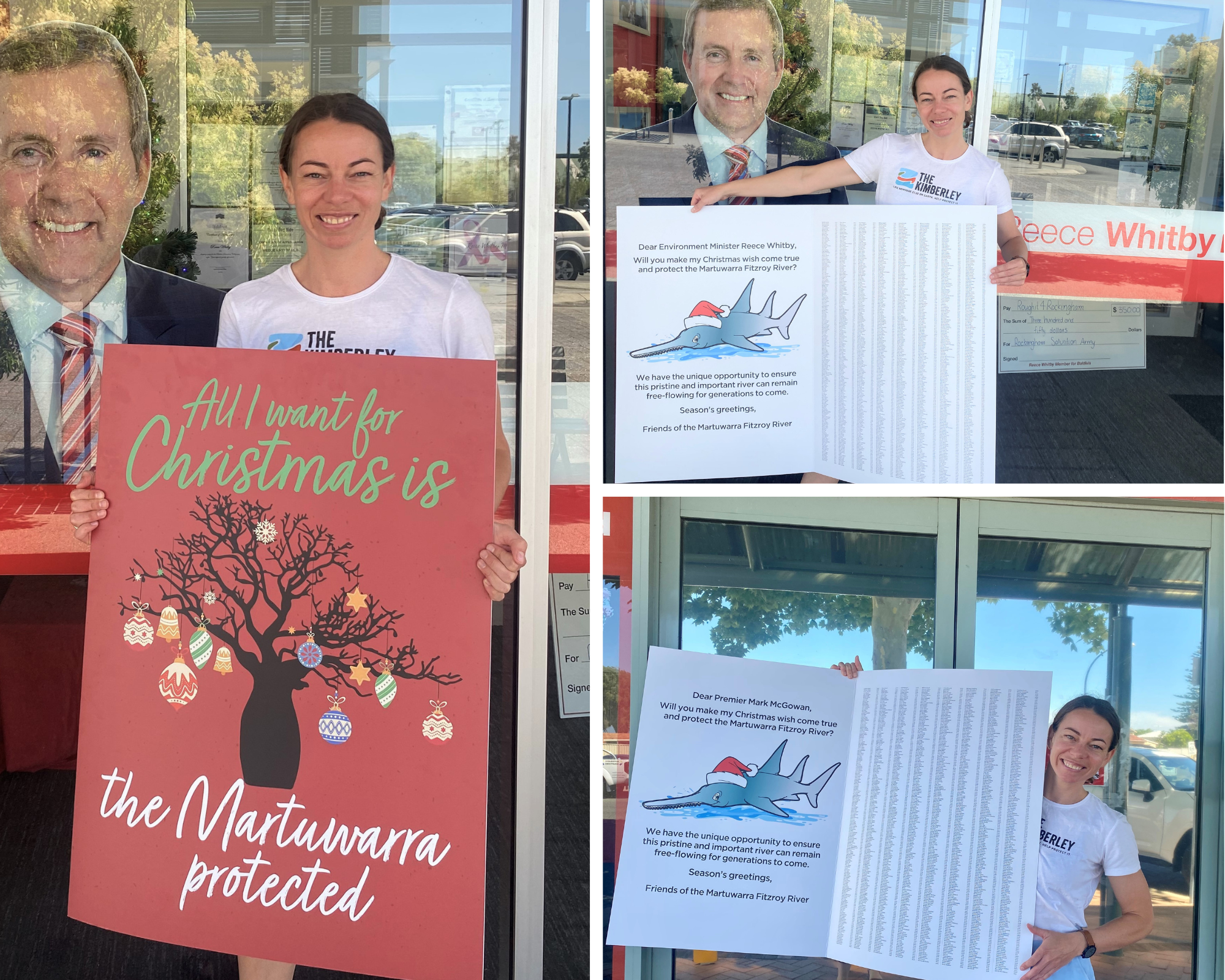 2022 has been a huge year and every petition signature and MP message has helped us get closer to our goal of protecting the Martuwarra.

We are motivated to maintain our incredible momentum into 2023 to keep striving towards protection for the entire length of the Martuwarra Fitzroy River from large-scale irrigation.