'Thinking Allowed' article on protecting the Fitzroy River, written by Suzy Stanford. Published in the Fremantle Herald and the Perth Voice, May 28, 2021. 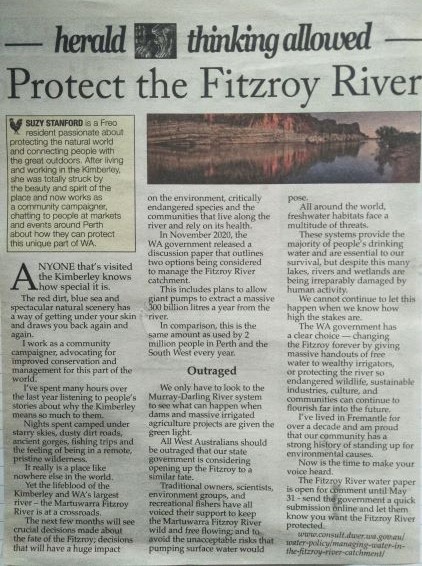 ANYONE that’s visited the Kimberley knows how special it is.

The red dirt, blue sea and spectacular natural scenery has a way of getting under your skin and draws you back again and again.

I work as a community campaigner, advocating for improved conservation and management for this part of the world. I’ve spent many hours over the last year listening to people’s stories about why the Kimberley means so much to them. Nights spent camped under starry skies, dusty dirt roads, ancient gorges, fishing trips and the feeling of being in a remote, pristine wilderness.

It really is a place like nowhere else in the world.

Yet the lifeblood of the Kimberley and WA’s largest river – the Martuwarra Fitzroy River is at a crossroads. The next few months will see crucial decisions made about the fate of the Fitzroy; decisions that will have a huge impact on the environment, critically endangered species and the communities that live along the river and rely on its health.

In November 2020, the WA government released a discussion paper that outlines two options being considered to manage the Fitzroy River catchment. This includes plans to allow giant pumps to extract a massive 300 billion litres a year from the river. In comparison, this is the same amount as used by 2 million people in Perth and the South West every year. We only have to look to the Murray-Darling River system to see what can happen when dams and massive irrigated agriculture projects are given the green light.

All West Australians should be outraged that our state government is considering opening up the Fitzroy to a similar fate.

Traditional owners, scientists, environment groups, and recreational fishers have all voiced their support to keep the Martuwarra Fitzroy River wild and free flowing; and to avoid the unacceptable risks that pumping surface water would pose.

All around the world, freshwater habitats face a multitude of threats. These systems provide the majority of people’s drinking water and are essential to our survival, but despite this many lakes, rivers and wetlands are being irreparably damaged by human activity. We cannot continue to let this happen when we know how high the stakes are.

The WA government has a clear choice — changing the Fitzroy forever by giving massive handouts of free water to wealthy irrigators, or protecting the river so endangered wildlife, sustainable industries, culture, and communities can continue to flourish far into the future.

I’ve lived in Fremantle for over a decade and am proud that our community has a strong history of standing up for environmental causes.

Now is the time to make your voice heard.

The Fitzroy River water paper is open for comment until August 31 – send the government a quick submission online and let them know you want the Fitzroy River protected.