It’s been a big year for Kimberley conservation and together we have achieved a lot! 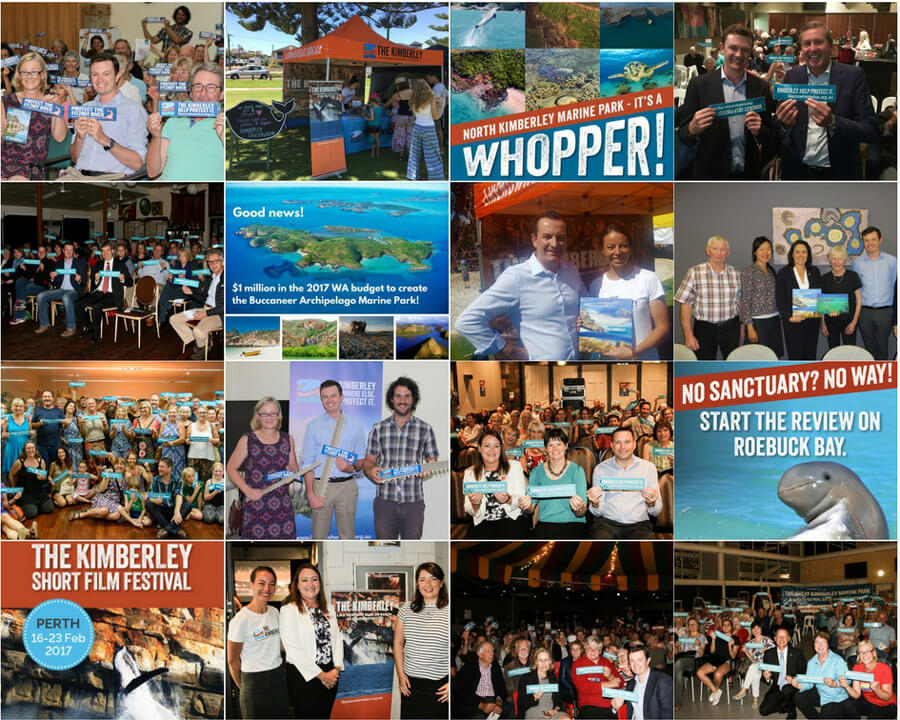 Last December saw the creation of WA’s largest ever marine park in the North Kimberley. The new park extended the Great Kimberley Marine Park to over 500km of the pristine Kimberley Coast.

This was followed in February by the creation of the Wilinggin National Park, covering 740,000 hectares of the remote Kimberley. This park is still subject to discussions with Traditional Owners but there is no doubt that everyone involved wants the area protected.

In March at the State Election all sides of politics made commitments to advancing protection of the Kimberley. Thanks to everyone who helped by attended the Kimberley Short Film Festival, sending emails, or making phone calls. Our message to ‘finish the job’ of protecting the Kimberley was heard!

Outgoing Premier Colin Barnett and Environment Minister Albert Jacob both said that their work in creating the Great Kimberley Marine Park was one of their proudest achievements in Government.

The new McGowan Government came to power and has now begun work on their important new election commitments. This includes creating a new Buccaneer Archipelago Marine Park and protecting the Fitzroy River with new Fitzroy River National Park and management plan for the river. They have also committed to a mosaic of National Parks in the Kimberley.

In the State budget this year the McGowan Government committed a further $1million towards advancing their Kimberley conservation commitments.

In September we rallied again for the Fitzroy River when a massive new irrigation dam was proposed at Gogo Station. The Environmental Protection Authority decided to assess the proposal at the highest possible level and noted in their advice the ‘high degree of public interest’. This is an important step towards protecting the river.

The final win for the year was in our long campaign to see Roebuck Bay protected. Currently it is WA’s only ocean marine park without a sanctuary zone. Thanks to our work along with local tour operator Cameron Birch, the Environment Minister Stephen Dawson has advised that the review will happen after the Buccaneer Marine Park is underway.

We will take the momentum of this year into 2018 and continue to work hard to secure the long-term protection of the Fitzroy River and the Buccaneer Archipelago. Wishing you a wonderful festive break!