Cast members from the Martuwarra Fitzroy River Film Festival have finally seen themselves on the silver screen as the festival came home to Fitzroy Crossing for the first time.

Featuring the stories and voices of local elders speaking on the importance of the Martuwarra Fitzroy River to the Kimberley, the short films showcased the ferocity and beauty of the Martuwarra — the second-largest river in the world by annual flow.

The series of short films are part of the long running campaign to “Save the Martuwarra” from the development of large scale agriculture in the area which could see billions of litres of water allocated to such developments, and are presented by environmental groups Environs Kimberley and The Kimberley - Like Nowhere Else. 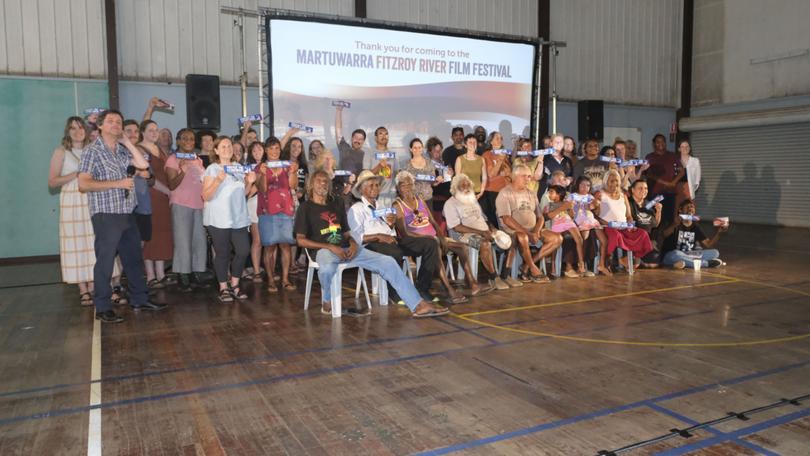 Independent filmmaker Stephanie King, who made many of the films, said the international response had been incredible.

“I’ve had contact with Indigenous people from all around the world saying the same thing is happening on their lands,” she said.

“This is a Fitzroy story, but it’s also a universal story.”

Bunuba elder Mary Aiken, one of the voices featured in the films and who has lived near the Martuwarra her whole life, said the government needed to protect the river from invasive development.

“The government needs to really look into it and needs to listen to us,” she said.

“It’s important for every one of us, not just Aboriginal people but non-Indigenous people too who enjoy recreational activities on the river.”

“The river is our lifeline, it feeds and provides us with everything.”

Environs Kimberley director Martin Pritchard said the film festival was a chance to celebrate the Martuwarra.

“The Martuwarra Fitzroy River Film Festival showcases powerful messages from traditional owners, local leaders and members of the community, and the threat that large-scale development poses not only to the river, but also to the people living in the Fitzroy Valley,” he said.

“The only people who stand to benefit from extracting water from the Martuwarra Fitzroy River are those who are already wealthy, while traditional owners, the local community, the environment, and the tourism and recreational fishing industries lose out.”

Commenting on the films, Kimberley Land Council chairman Anthony Watson said the festival gave an important insight into the need to protect the Martuwarra Fitzroy River.

“These are the stories of our people, our heritage and culture, and our spiritual connection to the Martuwarra Fitzroy River,” he said.

“They are the reason this river needs to be protected and why we, as Aboriginal people, must fulfil our cultural obligation to look after it.”

Last year, 43,000 submissions were made to the State Government on the Fitzroy River Water Allocation Plan, with 1100 submissions coming from Kimberley residents.